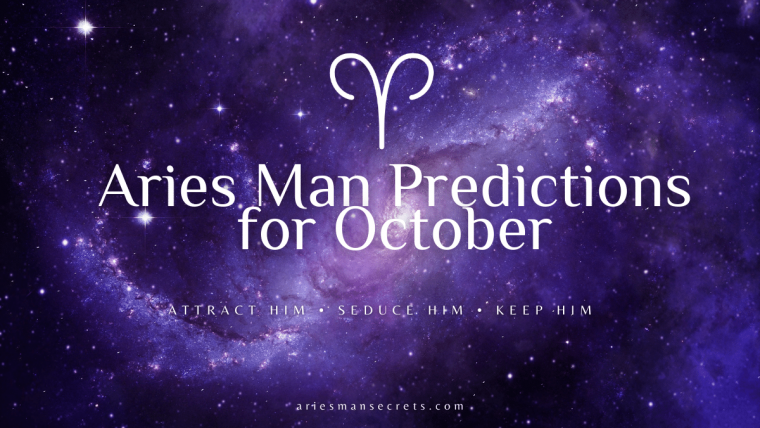 Hello, my darling readers! How are you? Have you only just survived September, or were you thriving through it? I hope the latter, because October predictions are here, and it’s time to dive in, so let’s go!

The first of October truly has a Venusian atmosphere – both the Sun and Venus (conjunct) in Libra – the Aries man’s seventh house of love and partnerships! This is a great time to go on dates and have romantic one-on-one meetups.

The second week of October presents a great time for healing and inner growth, especially if the Aries man has finalized some things from before, through constructive conversation. Starting (or restarting) couples’ therapy can be a great thing to do during this Full Moon in Aries.

The third week offers opportunities for relationship and family growth. If he is his own man and has worked hard on healing his inner child, then the Aries man might come to make some crucial decisions about his domestic and family life during this lunar cycle.

The final week of October will offer powerful insights into his own and his partner’s souls. This is a bountiful time to plant the seeds of intimacy and metaphysical ties that you desire to bond the two of you together; the Moon is ripe for manifesting…

It Takes Two To Tango

During the first week of October, the Aries man’s focus will be on his career, social interactions, and intimate life. His ruler is in Gemini and his third house of communication, and Jupiter has almost made its way back into Pisces thanks to its Retrograde walk.

This means that the Aries man will have a lot of past encounters and he will be forced to retrace his steps, words, and behavior from the previous couple of months. Especially when it comes to his long-term relationships and love life.

During October, his focus will definitely be on his long-term partner or secret lover, but he is also asked to reevaluate his stand on love matters and to let go of some people in order to make room both in his heart and his life, for some new romantic encounters.

It’s a great thing that his ruler is ‘on good terms’ with Venus (currently stationed in Libra), as this makes him more capable and fluent in expressing his true feelings and thoughts on love matters. Now is a great time to excavate the hidden parts of the Aries man’s heart chambers and see whether or not you should continue spending your time with him.

During the second week of October, the Aries man will feel overly exposed, as the Moon is conjunct Retrograde Jupiter in his first house of self, and he might be overly sensitive and prone to temper tantrums – just saying… He might hold through this Full Moon in Aries like a champ, but honestly, it’s quite improbable.

During the Full Moon in Aries, his inner wounds and wounded child are going to be at the front and center stage for all to see. This is a time when he should do the healing work and dedicate a great portion of time to work on himself.

Talking about therapy and couples counseling is a great idea now, as it might prompt him to do some therapy and soul-searching on his own. The Aries man never stops being a child, the problem is when his inner child is wounded, that’s what creates all those temper tantrums and character-development problems.

It’s a perfect moment to go out and about, to do something constructive and productive, and it’s a perfect time for an Aries man to relinquish his need for control and just let things (and people around him) flow.

The third week puts a focus on his family and home life, as well as his love life. This might be a challenging week for him as he is asked to juggle both of these life aspects at the same time. Good thing his ruler is in Gemini and making (almost) an exact trine with Venus in Libra, for that means that he has the tools and the wits to juggle two areas at once.

This is a great time to explore his emotional depths and dedication, so you might want to plan a trip, or go somewhere where his focus can be on the two of you, at least for a couple of days.

At the same time, he will be asked to seek comfort and encouragement from his family (his parents, especially his mother might play a big role during this time). It’s essential that the Aries man has a good conversation with his elders, or at least receives some kind of emotional support from his mother.

The third week of October is also a great time to have fun and play with his kids or any kids in general. If he gets a visit from his relatives, which includes gatherings with his nieces and nephews, then it’s a perfect time to help him realize his true wishes and how he wants to proceed with his own family in the near future. A character-shaping week indeed…

The New Moon Eclipse Is Coming For Ya…

The fourth week of the month casts an overpowering light on the Aries man’s love and intimate affairs! This is a perfect time for an Aries man to listen to his partner or love interest, and to find himself in service to his better half.

The Moon comes into touch with Mercury, the Sun, Venus, and Vertex, and it strongly illuminates his seventh and eighth houses. It’s a time of powerful change and experiences that lead to new depths within his relationships.

On the 25th, there’s a New Moon Eclipse in Scorpio, and it marks a new chapter in his love life. This is a very potent and important time for his intimacy and the metaphysical connection with his partner or love interest. Now is the time to plant the seeds of new beginnings and form new romantic relationships that will have lasting consequences.

There are also undertones of finances and money for the Aries man; he is asked to reevaluate his relationships with his body, food, and money, versus that of his partners. Now is not the time for him to be the judge or the jury of anything else but his own matters and dealings; it’s best to stay clear of judging others based on their looks and financial status, and instead turn the mind’s eye to oneself and one’s own dealings.

Read also: Aries Man and Commitment – All You Need To Know

October will be a deeply transformative and productive month for the Aries man. There are a lot of opportunities for both growth and romance; especially during the first and the last weeks of October.

His mood will be mostly leveled and without any excessive temper tantrums, aside from the Full Moon in Aries during the second week of October. When that time comes – brace yourself, for the winter is coming!

Then the Aries man will have his hands full during the third week since many aspects of his personal life will be activated all at once. So, he will have to become a proficient juggler and multitasker in order to get everything sorted and done.

The final week is the most potent week for manifestation and for growing closer with his lover or partner. The New Moon in Scorpio on the 25th marks a beginning of a new, and very deep cycle for the Aries man that will stretch into the oncoming winter.

I recently wrote an article about an Aries man’s texting style. You might want to give it a look before November approaches, it’ll help you ease through the challenging periods or misunderstandings. Trust me on this one.

All the love and happiness in the world.