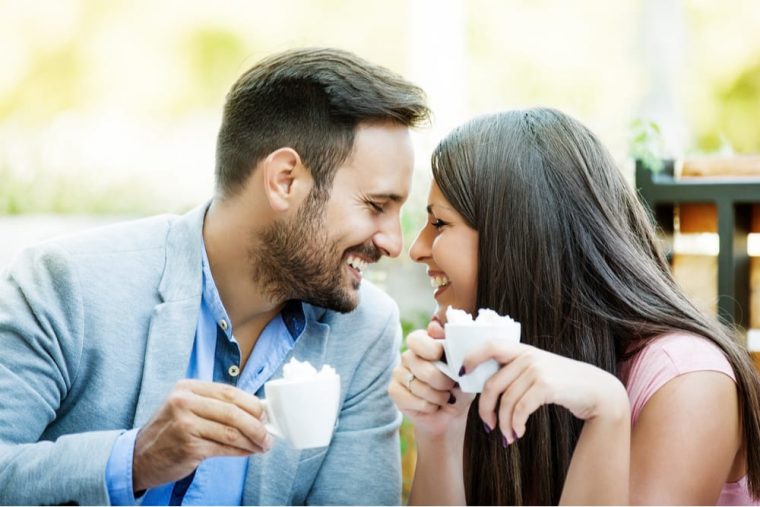 In the early days of a relationship with an Aries man, it can be hard to know if you’re moving in the right direction. With Astrology behind you, though, you can get into the head of your Aries guy and make sure you’re setting yourself up for smooth sailing!

Are you dating an Aries man but it doesn’t feel like its really progressing? Maybe you’re feeling like you aren’t so sure he likes you as much as you like him. What can you do to find out with pushing him?

I want to help you! Aries men are hard to get but once you do, you’ve got to work harder to keep them. You may want to keep reading and learn more about the early stages of dating an Aries man and what you can do to make progress.

Starting With the First Date

Going into something potentially serious with an Aries man requires a stellar first date. If you’re about to take that step, you’ve got to know what to do so that there will be a second date or more beyond.

The first thing to know is that the Aries man is an alpha male, and that means he wants to plan the date. Let him. Even if you’re used to making plans, give him the reins on this one.

While talking to him, listen to what he says and get to know what he likes and cares about. Try to get his attention by talking about adventures such as travel, sports, or something that you’ve done that he may enjoy.

He will admire you and be intrigued by your exciting experiences. It will make him want to ask more questions and get to know you, which will take a second date!

Once you do the second date, you’ll give him more juicy details about your life and things you’d love to try that you haven’t yet. Talk about places you’d like to travel as well.

Things like this get his blood pumping, and he’s going to see you as a potential partner in crime. Aries men can be a bit into themselves, so be sure to ask him questions, too. It makes him feel important.

Be sure you look your best to appeal to his sexual side. Have your hair fixed and looking neat. You don’t have to look like a supermodel, but do show that you care about your appearance.

Don’t be aggressive, but don’t be passive either. He doesn’t like women who are easily turned into doormats. He likes a strong woman that will stand her ground.

If all goes well, this will land you many more dates to come. Whatever you do, try not to dive into bed with him right away. This gives him the idea that you’re okay with being casual, so if you aren’t, then don’t do it.

How To Tell When An Aries Man Is Into You

Now that you’ve started something with your Aries guy, you want to know if he actually likes you and sees some type of future with you. There are some signs you can look for.

These are some very obvious ways to know an Aries man is into you!

Now what can you do to make sure he stays into you? I’ve got some ideas for you!

You’ve gotten him out on dates and he seems to like you. Now what? What can you to do to ensure that he’s going to get closer to you—and maybe even decide you’re the one for him?

Now you are armed with a game plan to keep your Aries man interested in you and excited about the possibilities of the future. Never pressure him, and never tell him what to do.

As long as you act like his partner and not like his mother or teacher, you’ll do well with him. Don’t let him get away with anything, though! You’ve got to stand your ground and set boundaries and expectations so he knows what is and isn’t ok.

Be open and honest with him. For the times when you don’t feel like keeping up with his busy life, it’s fine if you stay home—but let him go do whatever he had planned. He will appreciate your understanding.

Read next: 3 Texts That Melt an Aries Man’s Heart

Aries men are hard to get. They’re sexy and motivated, and you’ve got to give him your best in order to stand out and make him feel you’re the right one for him.

You can totally do this if you follow the steps I’ve given you. Keep him excited and feeling like you’re a big adventure he can’t wait to explore.

He will see you as a prize, and as long as you’re showing him that you are, things will go very well between you two. Be supportive of his goals or ideas. Try not to bicker with him (he’s a sore loser).

He doesn’t like to own up to when he is wrong, but if you teach him how to do this by example, he will start to grow as a man and as your partner. Marriage will only come when he’s totally ready.

Don’t ever try to push him into marriage. He will either back away or he will resent you for trying to push him. Either way it won’t end very well. He will want to get away from you.

The Aries man in love is quite powerful and tends to make you feel safe. He has that quality of making you feel like a million bucks in his arms. When you have his love, you feel on top of the world.

You know that you’ve earned your way into his heart. Truly, he could have just about anyone he wanted, but he’s choosing you. Hang onto that by doing everything you can to keep his interest flowing.

He’s a strong man, and yes, he can be stubborn. But if you plant the seeds and build a strong foundation, you’ll end up with a keeper!

Did you know that hilarious actor Paul Rudd is an Aries man? If you ever watch any of his films, you see his allure!

I’d love to hear about your experiences with a new partner! Share your story (or questions) with our community in the comment section below—it’s anonymous!